Browse: Home / Will Racing for Pinks come out on top in the battle of online pokies this autumn?

As November’s new selection of top online pokies come racing out of the blocks, we’re going to examine whether one game in particular, Microgaming’s Racing for Pinks, has what it takes to go the distance.

The slot is based on American Street Racing, but in an era long before those popularised in the Need for Speed series of games and films. Racing for Pinks harkens back to the American muscle car era of the 50s to the 70s, where young drivers would battle for supremacy by “Racing for Pinks”.

The winner of the race would win the pink ownership paper of the car of the loser, so these were high stakes games and often meant cars were souped-up to ensure they were as quick and reliable as possible.

This simple idea translates very well into the online pokies genre. The symbols are bright and with the sound effects and ambient music, perfectly recreate the automotive ambience.

Better still, the action on the slot is fast paced, with frequent Wilds (the Racing for Pinks logo) ensuring that players hit winning combinations regularly enough to keep their motors running.

The real positive points of the game are the free spins section, which when accessed by landing the Free Spins Girl on reels one and five, gives you 30 free spins with up to 5x multipliers available.

Alternatively, hit the Bonus Race symbol on the same two reels and you enter the Bonus Race game, where if you predict the winner of five races correctly over each of the five levels you win the big Grand Prize, which carries with it a multiplier of up to 175x your winnings!

This 5-reel, 243 payline online pokie machine offers fast paced fun this autumn, so why not see if you are willing to take the challenge of Racing for Pinks? 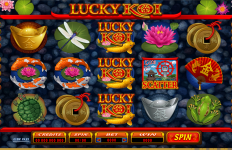 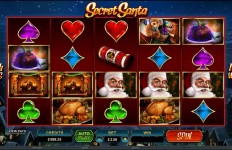 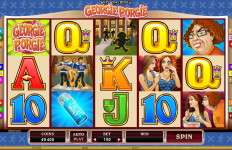